Lately I’ve been touting the blessings of spring, but deep down, my heart belongs to winter. 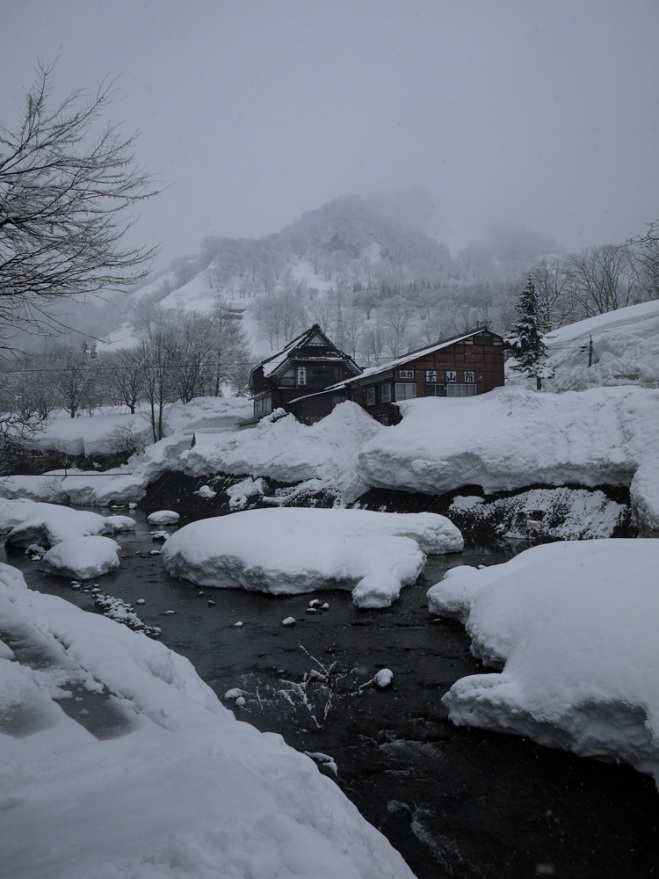 A few weeks ago Dan and I took a weekend trip to Hijiori Onsen, a tiny town in the mountains in northwest Japan. We took the Shinkansen to the last stop, then a bus for an hour, and we found snow. A lot of it. 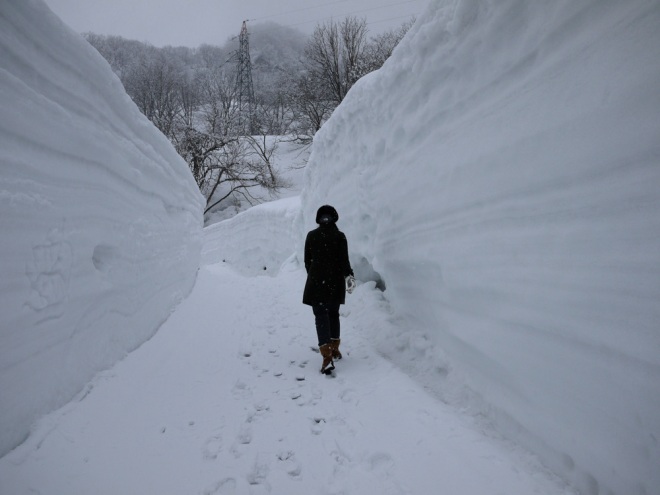 The morning greeted us with fresh snowfall, so we took stroll through town. It was quiet except for the sound of the river.

I was happy to spend the afternoon at our ryokan, tucked under the kotatsu. Through the window I watched the snow fall and tried to study Japanese, alternating sips of beer and green tea. When I needed a break from kanji, I stitched. Occasionally we raced to the window to glimpse a pair of hawks fishing in the river outside.

Hijiori Onsen is a hot spring resort town, and our ryokan had 3 different baths. Our first afternoon, I had this one to myself. The next morning I sat in a copper tub with the windows open and let snowflakes flutter in.

We stayed two nights, and both dinners were absolute feasts. Regional specialties included beef yakiniku, duck nabe (soup), mountain vegetables, and really good rice. We cooked our beef and duck nabe over a table with coals set inside. On Friday night, dinner ended with a dance. More photos of our two days of kaiseki can be found here on Flickr.

The owners at Yuyado-Motokawarayu ryokan were extremely welcoming. If you get a chance, stop by and say hello.

Last post, Ang wrote about all the internal organs we come across in Japan. She failed to mention all the external organs we see, so that’s where I step in. We’re yin and yang like that.

A friend invited us to a resort town in the mountains last weekend to escape the Tokyo heat. So nice. Super nice. And then super naked.

Japan has more hot springs than McDonald’s. I don’t know if that’s true, but you’re the one on the internet. Look it up. Any resort town worth its seaweed salt has onsen in the hotels, or an onsen park, or a hike with an outdoor onsen. They are very enjoyable. But to enjoy them, you have to be very nude. Nude-ish won’t cut it.

When I go to a gym, I’m a fairly modest guy. I don’t shower in my clothes or anything like that, but I don’t do naked lunges to dry off either (I’m talking to you, every old man at a gym ever). I move briskly. Disrobe, robe, go. People are in various states of dress, and that’s the part that throws me off. If there’s a room full of people, and some are dressed and some aren’t, I know which group I want to be in. It’s definitely not the group with the guy in just his socks.

But at the onsen, evvvvverybody is naked. More naked than possible. Don’t tell me zero divided by zero has no solution. I’ve seen the wrinkled answer.

Three generations of a family get naked as quickly as possible, shower, and then continue being naked in scalding water. If people get too hot, they hop out of the onsen and sit on the edge. For those of us still half-submerged in the pool, that puts us at eye level to a lot of person. It’s like staring at a celtic ring. So many twists and knots, but with flesh.

Then everyone stands around to cool down, grandpa does some lunges, they dress and leave. And it’s fine, because you can’t be caught in a compromising position if everything has already been compromised. That’s logic.