When friends visit, we take them to an Okinawan restaurant in Shibuya. There’s nothing special about the place, but it was one of our first restaurants in Tokyo, so we keep going back. It’s the same reason why one of us still listens to C&C Music Factory.

Some Okinawan restaurants in Tokyo keep it classy with flashing lights and tacky decorations: 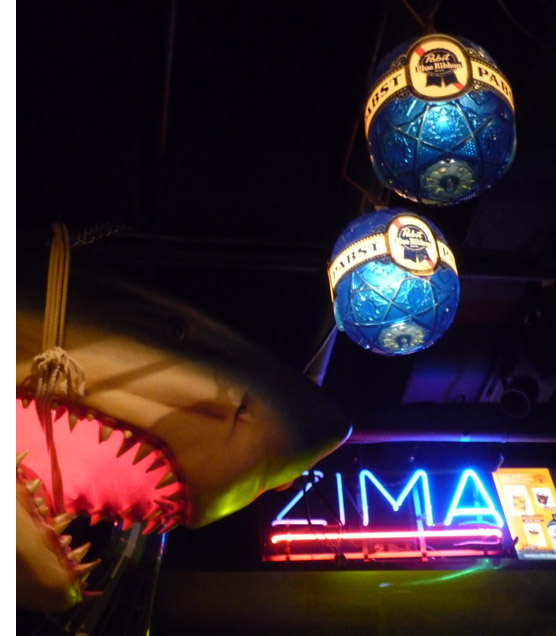 We always get a dish made of shrimp and mayonnaise. It’s good. Better than a scoop of mayo, ketchup (?) and shrimp deserves. (Serious face: shrimp farms destroy mangrove forests, so I try not to eat shrimp that often. I’m sure the Big Shrimp lobby is discussing how to deal with my inconsistent boycott.)

Before I moved to Tokyo, I had an unrealistic view of what Japanese people eat. Sushi…edamame…uh…other kinds of sushi. I had an image that everyone in Japan was extremely healthy, and that once I got here, I would become this sleek, Vitamin-D-glowing guy that smelled vaguely of freshly cut grass.

But now that I’m here, I use my own money willingly to purchase sausage/sauerkraut/mustard-flavored Doritos. Or Anchovy & Garlic Pretzel Bites. As it turns out I have an awful habit of seeking out odd-looking junk food and then being shocked when it tastes exactly as expected. And based on some of the smells emitting from guys on crowded trains, I’m not the only one.

Tokyo residents DO look healthy. But I don’t think it has anything to do with an all-fish-and-vegetable diet. I have friends here who hate sushi and vegetables and put mayonnaise on their pizza. Try to say with a straight face: “I’m a responsible person making sensible decisions and I’m putting mayonnaise on my pizza.”

Perhaps it comes down to portion control. My first few weeks in Japan I felt hungry all the time, but I wasn’t skipping any meals. It just turned out that when I bought lunch or went out to dinner with friends, the portions were smaller than what I was used to in the U.S. But it didn’t take very long to get accustomed to it, and when we visited the U.S. last year, I was that annoying person at restaurants saying, “Wow, I can’t believe how much food they serve here. There’s no way I can finish this,” (there was a way, and I did).

So take hope, world. Japanese people are just as willing to eat junk. They just stop a few bites earlier. Also, they have this weighing on their souls:

4 thoughts on “More On Mayonnaise”