What’s your million dollar idea? You know the one. The thing that occupies your mind when you’re scraping mangled receipts and Post-it note reminders out of a washing machine lint trap. (By the way, the inventors of Post-it notes worked at 3M until retirement…I find something awfully depressing about that).

Anyway, what I was getting at was this:

I can barely wrap my head around this. I can definitely wrap my stomach around it, but my head, not so much. That beauty is a Ramen Burger, and I call dibs. I’m bringing this back to the States, and I’m going to make a sensible, not-outlandish living as a Carnie, hopping from town to town, county fair to farm show, introducing America to something they didn’t know they loved.  I’ll make enough money to throw slices of fresh bread to the ducks, not that week-old stuff. That stuff is for the birds.

This past weekend our neighborhood was overtaken by food vendors, a lot of them, for the Azabu-Juban Noryo Festival. The streets filled up with Tokyo folk (Tokyoites? Tokyojin? Tolkeins?), creating a thick wall of people on every street, and picking up groceries meant redefining my personal comfort zone. But on the positive side, picking up groceries also meant stopping for grill pit fish, giant scallops swimming in a shell full of butter (or mayo, it’s hard to say, my eyeballs were salivating), potato chips on a stick (dibs again), and draft beer. Lovely stuff. 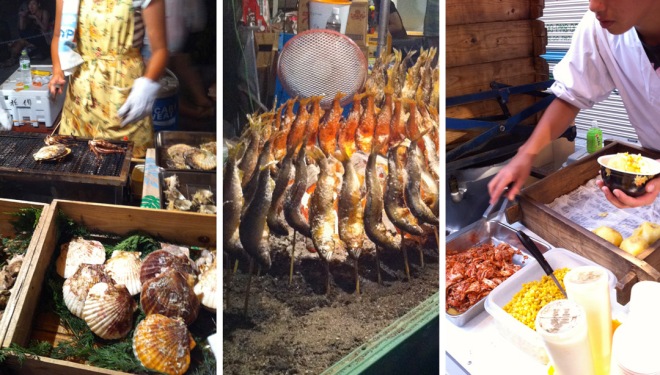 The Ramen burger can’t be that hard to make. It’s cooked ramen noodles, griddled into the shape of a bun. Then you throw in some roast pork, spring onion, bamboo shoots, cabbage, and a broth-inspired sauce (soy, miso, or tonkotsu – heavenly pork bone). Brilliant. 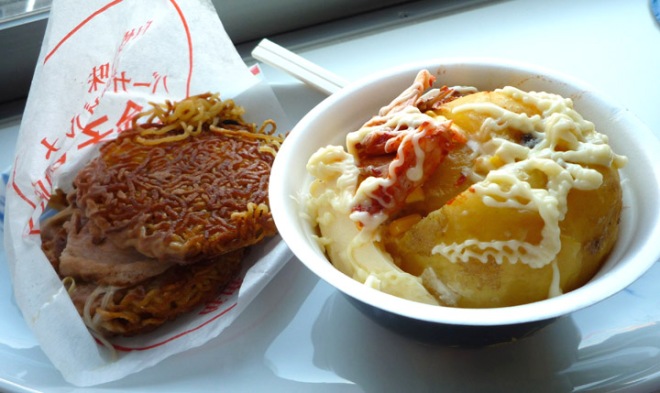 Oh, and that thing on the right is just some delicious potato topped with butter, mayo, salt, kimchi and corn. Whatever.

8 thoughts on “Quarter Pounder With Noodles”